She's a saavy PR pro who makes a living fixing problems for the Washington elite.

He's the President of the United States, also known as the leader of the Free World.

Having been instrumental in helping Fitzgerald Grant get elected to the highest office in the land, Olivia Pope knows a thing or two getting what she wants.  It's unfortunate - at least to the million-and-some Olivia Pope fans in the world - that the one thing she can't get is the love of her life: the President.

Drama-filled scenes that tug at heart strings, like the one witnessed tonight, intertwined with the consistent cattiness of some politicians (think shutdown 2013), is what makes the show work.  In fact, TV Guide named it the 13th best series of 2012 - for good reason. 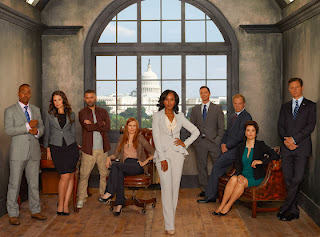 With it's season premiere tonight, viewers are ready for another season of Olivia and her Gladiators (her nickname for her "fix-it" associates capable of getting anyone with a few bucks out of a jam, the President and his painfully vindictive wife who'll stop at nothing to defend her reputation, and Chief of Staff Cyrus and his amusing antics (Cyrus is pure entertainment for this writer; watch and you'll see).

What makes me watch week after week right precisely at its allotted airtime of 10 p.m. Eastern on Thursdays is really quite simple: the chemistry between the characters and the writing.  Let me rephrase: the brilliant writing.  It's quick, yet smart; snarky, yet polite; intelligent, yet really fun and funny.

What some pegged as a nighttime soap with little substance when it first aired two years ago, has become an obsession for the world, particularly on Twitter where hastags for Ask Scandal, Olivia Pope, and Gladiators were all top trenders Thursday night.  While there's lot of competition for TV shows to get into the top trending position in primetime, it's not hard when the show connects with its audience, like Scandal does.

Whether you're a hopeless romantic, a political junkie with a penchant for drama, or just a lover of network TV, you'll like Scandal.

Perhaps the reason for me is because this made-up presidency reminds me of that of JFK's, with young kids living in the White House, a youthful President commanding and leading, and all the glitz and glamour of a seemingly Camelot era present. Oh, and an assassination attempt, too (there's more than just a love affair here).

Add into the mix the President is white and his mistress is black, and it appeals to a whole other audience and demographic - one more in tune with current times.

What about you?  What makes you crazy for the Scandal?

Posted by Mike McGinley at 12:01 AM No comments:

If you're one of the three million customers in New York, Los Angeles, Dallas, or any of the other markets Time Warner Cable provides service to, you likely missed the CBS Evening News last night.

That's because the cable company and CBS, one of the big "three" television networks, were unable to reconcile a fee dispute, so just after 5 p.m. Friday, it was lights out for CBS. 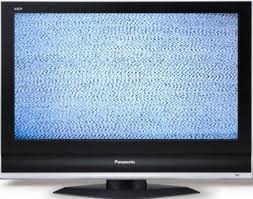 You can read more about the dispute in the New York Times' article from today, but truth be told, a dispute like this - no matter what side you're on - looks bad for both the cable company and the network.  Both appear greedy and dismissive of viewers, as if their fees are more important than Grandma watching The Young & The Restless (which she may not get to watch since negotiations are expected to last more than a week). In all honesty, both are in the customer-service business. A move like this normally infuriates viewers and draws harsh criticism directed at the cable provider, but with dismal summer programming, there hasn't been as much backlash as CBS had hoped.

The network, which is asking for a $2-per-customer re-transaction fee, has been reaching out to viewers via social media for support.  Hundreds of users commented on CBS' official Facebook page last night, many saying CBS was at fault for demanding too much money. One commenter even said she'd write to their advertisers and begin boycotting their services.

TWC issued a statement saying "CBS is trying to delay this negotiation right up to NFL season, which is not fair to our customers," a spokesperson said. "We’ve accepted numerous extensions at this point, but it’s become clear that no matter how much time we give them, they’re not willing to come to reasonable terms."

The cable provider, too, has asked customers for support, utilizing its social media outlets and public airwaves.

It, like so many issues these days, comes down to the almighty dollar.  By CBS demanding more money from TWC, TWC would probably be forced to raise customer costs.  By TWC refusing to pay more for CBS, subscribers may lose CBS in their homes.  All in all, it's a miserable situation, but in the end, the ones who really get screwed are the customers.


Posted by Mike McGinley at 2:14 PM No comments:

If You Think You Can, You CAN!

If nothing else, remember:

Quit it with the negative energy; noone needs or wants it.  Go after what you want, and when someone tells you you can't have it, try harder.

Amen.
Posted by Mike McGinley at 10:35 PM No comments:

What Are Those PPC Ads? Actually, What's PPC?

Often times, people get so engrossed in the industry in which they work, that when they speak and write they  mistakenly use industry jargon or talk too technically - causing the folks listening to get uber confused.  That's why the other day I decided to write a quick, short and sweet blog post called "10 Things I Never Knew Before I Did PPC."

See, I work in an industry where jargon is overwhelming, so the average person never really understands what I do when I tell them I'm a PPC Manager.  In writing the blog, I hoped to resonate with readers out there on a more humanized level.  I hoped to show them that they see my work (PPC or paid ads on Google, Yahoo and Bing) every single day, and many have no clue what it is.

In the ever-changing digital world, it's easy to bypass certain aspects of the Internet when web surfing.  Heck, I don't look at organic listings (the normal listings found in the middle of the search results page) nearly enough when I'm at work.

PPC, in short, is a quick way to get your name/brand/products/services out there to the masses, as long as you have the money to spend to pay for every click accrued.   And, it's what I choose to do for a living and actually love doing.

If you have a moment, check out my post on my company's blog and tell me whacha' think!  Thanks for reading.

Believe it or not, just this week I noticed four digits of Twitter followers on my Twitter handle, @Mike_McGinley.  Now, to be clear, I've been tweeting since 2009 and truly, rarely ever take note of my number of followers, believing that the number fluctuates so much it's more of a hassle than anything.

But, this week, something really stuck out: the four-digit number itself.  To me, that's significant enough to merit a blog post and significant enough for me to say that I take it seriously.  I know, for many of you, me saying such and expounding upon that statement further to say I feel it brings a bit of "responsibility" sounds silly, but I'm being honest.  In today's society, with so much "out there" on the web all the time, in various views and expressed in various ways, it's important moreso now than ever, that those tweeting and posting on platforms with big audiences are responsible - socially, ethically, journalistically, and on.

While I left the journalism biz more than two years ago, you'll notice I post a lot about world and local news, but you'll also notice I always credit the source.  See, since I was trained to give attribution and to deal in facts when making matter-of-fact statements, I try to abide by that notion.  I hope it's something my followers respect, and I think it's something we should all strive to do.

May none of us ever make a flap on our timeline without correcting it immediately.  May we never express hateful views that discredit us as positive tweeters.  And may we never consider Twitter a joke when posting things that can go viral and affect lives.

And, of course, may we make an impact on all those who read our 140.
Posted by Mike McGinley at 9:59 PM No comments:

To Pin Or Not To Pin?

Everyday, undoubtedly, somebody is asking me about Pinterest - whether to do it or not.  Being in the field I am now, of course I tell them to go for it!  What fun it can be to share photos of your favorite products, places and foods, and organize them neatly on specific boards for your viewing audience to enjoy.  The organizational aspect of it (which is still lacking in some social-media worlds) is enough to make me want to pin.

My colleague, Leni, wrote a lovely post the other day about why to pin and, yes, even why you might NOT want to pin (ahem, check out the possible legal problems). It's particularly worthwhile for those whose brands (whether personal or professional) are colorful, visual, and people-oriented.

Check out Leni's take on Pinterest and how it can help you.

Happy pinning!
Posted by Mike McGinley at 4:58 PM No comments:

It's Been A While & That's Not My Style

So, I admit, I've been away for a few months.  Summer came and went, fall flew by, and here we are in the middle of winter and I've yet to give you a fresh musing or two.  See, I've been busy at my day job at @solidcactus, keeping up with some other personal chores, and undertaking a new venture most recently: guest writing for BitRebels.com.  With nearly 4 million monthly visitors, the technology/social media/geek blog is a great place for me to share more musings and tidbits on topics I'm interested in.

It's great contributing to a blog that's fresh, update-to-date, and witty.  The posts range from truly unique and innovative informational pieces on anything "geek" to "how to" guides for the world of social media, a place which has given me a lot of pleasure the past several years during my time in the media and now as an Internet marketer.

That said, I'll try to keep this page active going forward, with a post or more a week.

And, if you have some free time now, feel free to check out my first two pieces on Bit Rebels:

Mike McGinley
Mike McGinley is a 20-something online marketing professional and former newspaper journalist who's covered entertainment, small-town politics, home & garden, general-interest and cultural stories in Luzerne County, Pennsylvania. Today, much of his time is focused on working with clients in the online advertising world, spending time with friends & family and living life to the fullest. Follow him on Twitter at @Mike_McGinley.